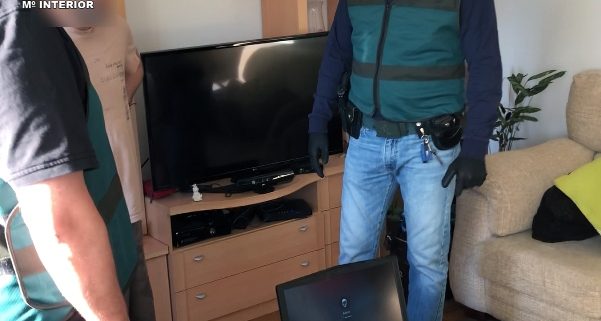 It is about a man, who not only took intimate photographs of a minor daughter of his partner without her consent, but also installed "malicious software" on the minor's computer

This "malware" allowed the investigated person to have unlimited access to the minor's private files, to spy on the videoconferences she made with her friends and to activate the webcam when they knew she was changing her clothes

The agents have also intervened videos that contained images of the detainee having sexual relations with other previous partners, and even of a person who lived with him and his partner, always recorded without their knowledge

The Civil Guard, within the framework of the operation "PIXELS", has proceeded to the arrest of a person in the town of Milladoiro (A Coruña), for the commission of various crimes of sexual exploitation of minors and against the privacy of persons .
The investigation began as a result of a communication from the National Center for Missing and Exploited Children (NCMEC) to the Department of Telematic Crimes of the Central Operative Unit (UCO) of the Civil Guard through the usual channels of collaboration with the US agency Homeland Security Investigations (HSI).

According to initial information, an unidentified person was sharing photographs of a minor taken without her knowledge while she was naked in a bathroom.

Photomontages physically comparing your partner with your daughter

Along with the images of the minor, other photographs and videos were found in which an adult woman was seen having sexual relations with a man, and photographic montages that physically compared this person with another minor. The analysis of the images made it possible to identify the environment where some of the photographs had been taken, leading to the identification of both the adult woman and the minor, who turned out to be her daughter.

Once the possible location of the perpetrator of the events was focused, searches were carried out in open sources and other avenues of investigation, as well as several interviews with residents of the area, which allowed the agents of the Department of Telematic Crimes of the UCO, to link directly the images investigated with an adult man, resident in the town of Milladoiro (A Coruña).

In this way, it was also possible to identify the minor who appeared naked in the images provided by HSI, being the daughter of the sentimental partner of the investigated.

Thus, the possible perpetrator of the events was identified, and with the corresponding judicial authorizations, a search was carried out at his home, finding clear evidence that would link him with the investigated events, intervening various computer material and various accounts in social networks used for criminal activity.

Hidden camera in the bathroom of the house and "malware"

The study of the intervened evidence showed that the detainee was not limited to taking images of the minor with a hidden camera installed in the bathroom of his home, but that he had also installed malicious software on the computer that she used.

This malware allowed him unlimited access to the minor's private files, see in real time the actions carried out and even activate the webcam to see the minor at any time. In this way, she would spy on the videoconferences that the minor made with her friends and activated the camera when she knew that she could be changing her clothes.

She was posing as a young woman on social media

The study of the different devices allowed discovering the commission of other criminal acts committed by the same individual, who used social media accounts in which he posed as a young woman, establishing fictitious romantic relationships with several minors, which allowed him to obtain of them photographs and videos of sexual content, material that he shared with third parties on a popular messaging platform, in a group managed by himself.

In addition, the detainee was very active in a social network very oriented to the exchange of photos and videos, in which, by creating several profiles, he shared files of sexual content of various people with multiple contacts that had been obtained without his knowledge. Several of the victims of this type of activity were ex-partners of the detainee whom he had recorded having sex without their knowledge.

In another case, the photographs and videos shared showed a young couple, who once identified, it was found that one of them had temporarily lived with the detainee, who had accessed their private files by making copies of them and disseminating them then

The investigation has been carried out by the Department of Telematic Crimes of the Central Operative Unit of the Civil Guard in coordination with the Court of Instruction No. 3 of Santiago de Compostela (A Coruña).

Bal: & # 039; We ask Sánchez to intervene the accounts of the Generalitat... Arrimadas: & # 039; The Government should listen more to the sectors that...
Scroll to top