The organizing committee of the Max Awards announces, coinciding with the World Theater Day, the launch of the Special Audience Award, a new award that will recognize this season's favorite show for Performing Arts fans, among all the candidates for the 21th edition of the Max Awards, whose gala will take place on June 18.

In this way, the organization has developed a mobile application and online #VotaMax, which will allow theater lovers to rate from 1 to 5, each of the 88 shows in the categories of theater, dance, musical or lyrical, street , disclosure and for children, youth or family. The voting period opens today and will remain valid until May 29.

With this recognition, the Max Awards want to vindicate the role of the public for the development of Performing Arts: "Without the public there is no life on stage. We work to make the public enjoy and to reflect with him. If there is no reciprocity or a two-way conversation, our work has no value ", explains Inés París, president of the SGAE Foundation, organizer of the Max Awards.

In addition, all participants will draw two trips for two people each -including entrance, travel and accommodation-, to attend the 21st edition of the Max Awards as a public.
This new special prize is added to the Max Award of Honor, to the Max Amateur or Social Character and to the 19 categories to contest and will be made public once the voting deadlines are finished. 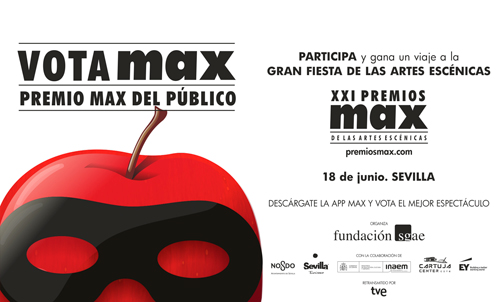 About the Max Awards

Organized by the SGAE Foundation since 1998, the Max Awards, whose prize is designed by the poet and artist Joan Brossa (Barcelona, ​​1919/1999), promoter of one of the renewing collectives of post-war Spanish art, have been consolidated as over these 20 years as the broadest recognition in the field of Performing Arts in the Spanish State.